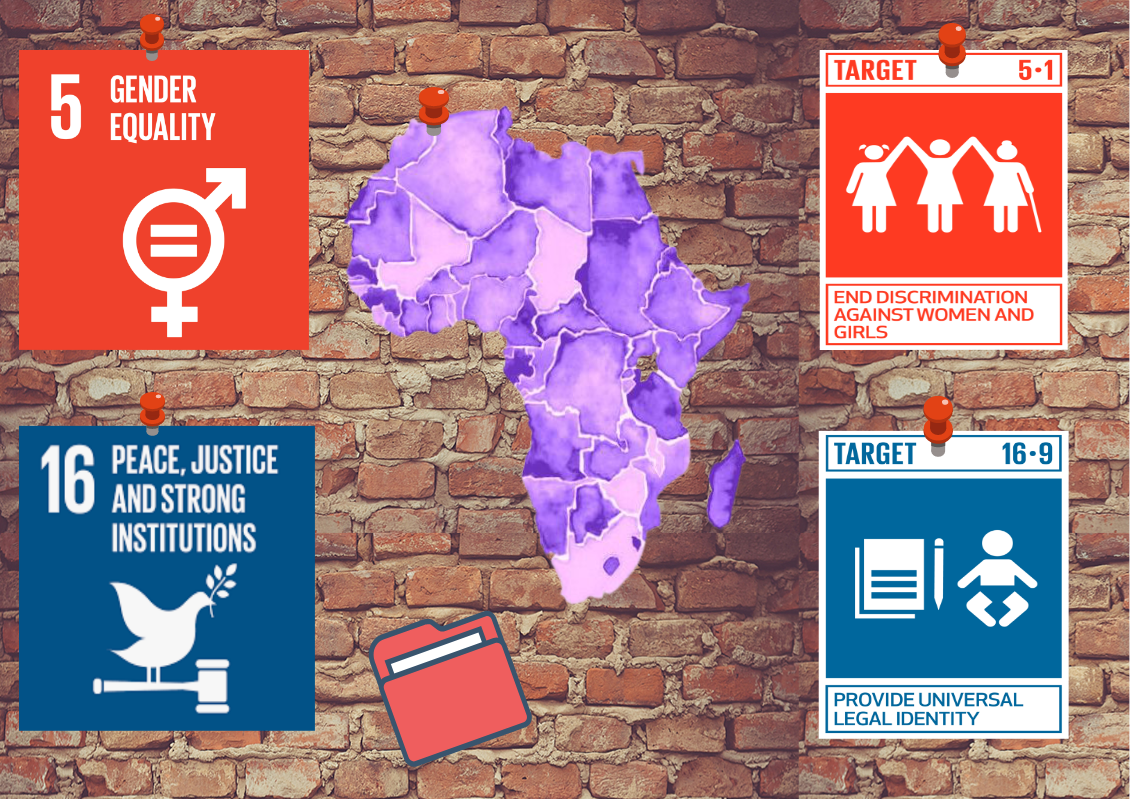 Continuing the Series on Migrant Women

In continuing the series on the exclusion of migrant women, we are looking at accessing and maintaining identity documents by migrant women in Africa and globally.

Previously in this SIHMA series on the exclusion of migrant women, we have discussed the lack of access to the labour market and the labour-related policy making [i]. The second blog was more devoted to mental and physical health and access to health care [ii]. The third article talked about the limited access to education for migrant women and girls [iii]. The most recent article in the series related to access to housing for migrant women [iv].

More than 30% of the adults living in Sub-Saharan Africa lack an ID [1]. According to the Identification for Development (ID4D) initiative, women are less likely to have an ID than the rest of the population, with about 44% of the women surveyed presenting no form of identification, compared to 28% of men [1]. Access to Identification Documentation is fundamental to accessing rights and services. Women and Girls access to gender equality and equal access to identity documentation including birth registration is expressly provided for in terms of the Sustainable Development Goals and Targets. Goal 5 is to ‘achieve gender equality and empower all women and girls’ and target 5.1 is to ‘end all forms of discrimination against all women and girls everywhere’ [13]. Building on which, Goal 16 is to ‘promote peaceful and inclusive societies for sustainable development, provide access to justice for all and build effective, accountable, and inclusive institutions at all levels’ with target 16.9 being to, ‘by 2030, provide legal identity for all including free birth registrations’ [13]. Yet these goals and targets are far from realised. In Nigeria for example, the number of men above the age of 16 who had a National ID Number (NIN) was higher by 8 million than that of women who possess and ID [12]. Crucially, gender-gaps in documentation tend to be significantly smaller in middle and high-income countries. In Niger, Benin, Chad and South-Sudan, there is a 20-percentage point gap in ID ownership between men and women [1] . Data from the surveys conducted by ID4D underline how countries which present the biggest gender gaps in ID coverage, have major legal barriers for women’s access to identity documents. Such barriers are often the product of prevailing social norms, and are parallel to deep-rooted assumptions on gender roles and on the social responsibilities of women. Crucially, Chad and Niger rank respectively 158th and 151st out of 160 countries on UNDP’s gender inequality index [1]. The correlation between gender norms and identity documents can be understood as central to the fact that, whereas married men are more likely to have an ID than unmarried men, married women are just as unlikely to have an ID as unmarried women [1]. This can be understood as the outcome of traditional gender roles: once married, men often become the head of a household, and must be able to access services that require ID [1]. On the other hand, women transition from their parents’ household to that of their husband, and thus maintain a constant (low) rate of possessing an ID both before and after marriage. Difficulties in accessing documentation are also heavily linked to the intersection of gender and income [1]. In fact, data underlines the positive association between poverty and not having an ID, with approximately 43% of adults being without ID documents in low-income countries, compared to 2% in upper-middle income countries [1]. All else being equal, people in low-income countries are:

As reflected in the figure above 8 out of the top 10 countries with the greatest gender gaps in ID coverage are African Countries, 5 of which are situated in West Africa [1].

Women are vulnerable to gender-based legal barriers to obtaining identification, which comprise of regulations and laws that make it more difficult for women to access documentation [2]. This is especially true for married women, who are majorly required to:

Gender-based legal differences in accessing ID are majorly linked to the requirement of the permission of a male guardian for the documentation of a woman. This becomes especially complicated when considering the social and legal norms regarding name change upon marriage, divorce or widowhood [2]. In fact, documentary evidence is required of spouses who change name upon marriage or divorce, and the difficulties entailed in accessing documentation disproportionately affect women, since it is mainly women who take the surname of their spouse. Evidence from Pakistan, Cameroon and Benin underlines how marriage certificates can be required for a national ID card [2]. In Gabon, women are required to provide their husband’s name, ID, nationality and permission when applying for a passport [2]. In Yemen and Sudan, a married woman without personal ID can be inscribed in her husband’s passport. Such requirements and adaptation s to not apply to married men [2].

Another gender-based barrier against women can be identified in the difficulties that women face when registering the birth of a child [2]. In Barbados, Fiji, Namibia and Burundi, mothers are allowed to register their new-born only if the father is absent, incapable, or dead [2]. In Bhutan, it is not possible to register the birth of a child born from an unknown father [3]. Here, the registration of the birth of a child requires the identification documents of both parents and their marriage certificate [2]. In The Gambia, it is the father that must register the birth of a child born within marriage, whereas it is the mother who is legally responsible to do so when the father is unknown or missing [3]. The fact that women alone cannot register the birth of their child born in wedlock but can if born out of wedlock creates a gender-based barrier and can also trigger gender-based social stigma [2]. This is especially significant in situations such as that of Burkina Faso, which in 2010 required a birth certificate for the voter registration exercise. Given the low rates of birth registration, witnesses and elders were used to obtain proof of identity, yet each citizen required at least 2 witnesses to vouch for their birth in the country. Nevertheless, it was significantly more difficult for women to prove their citizenship because, unlike men, women generally and disproportionately had to leave their birth villages upon marriage [2]. This makes it significantly more challenging for women to be eligible to vote as in the absence of a birth certificate they would have to travel back to the village from which the migrated for marriage and locate two witness to confirm their birth [2]. This resulted into an overwhelmingly low voter registration along gender lines [2]. Additionally when discussing women’s access to identity documentation, what must be underlined is that gendered inequality in acquiring nationality can perpetuate cycles of statelessness particular in terms of birth registration documentation [2]. Moreover, enforced patterns of statelessness prevent the subject’s enjoyment of civil, political, social, economic and cultural rights [4], and their lack of legal identity [2]. This becomes especially relevant if we consider how several countries limit the rights of women to confer nationality on a non-citizen spouse or their children, whilst granting such rights to men which is in contravention of rights guaranteed under CEDAW’s (Convention on the Elimination of All Forms of Discrimination Against Women) Article 9 [2]. 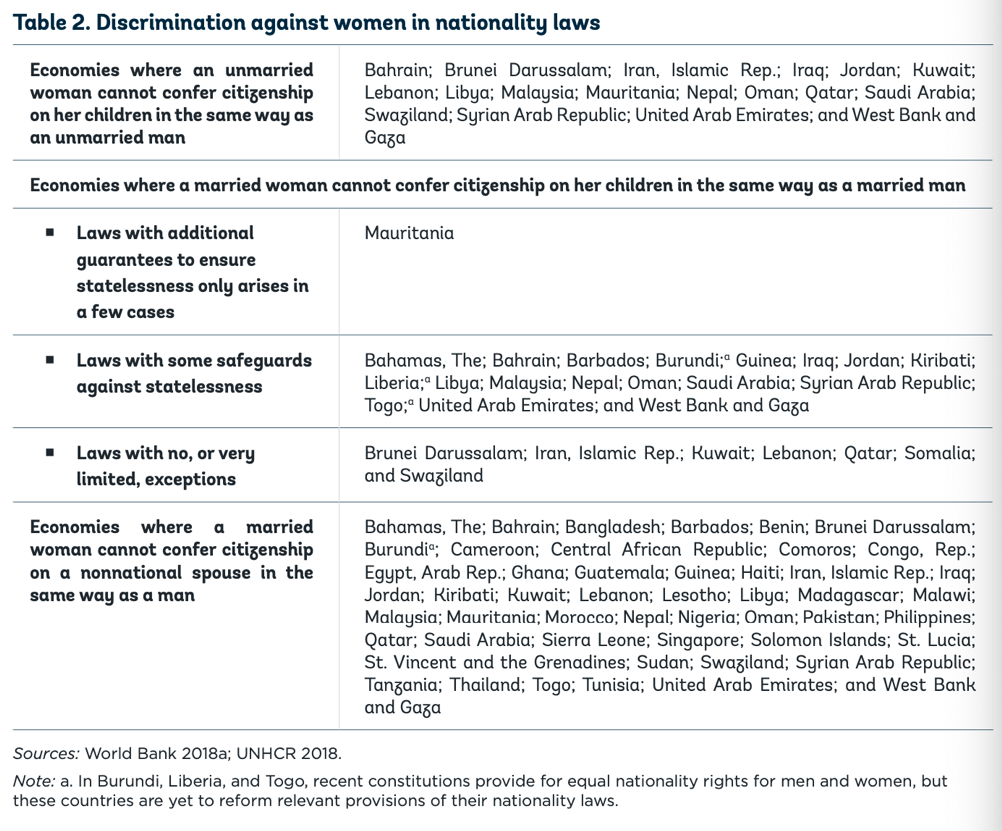 As reported in the table above, married women cannot equally confer citizenship on their children in the way that married men can in 26 countries [2]. Parallel to this, unmarried women and men cannot equally confer citizenship on their children in 18 countries [2,5,6]. Crucially, when nationality law is based on paternal descent alone, there is a high risk for children to become stateless if they cannot acquire a nationality based on their place of birth or on that of their father [2]. In fact, in this case children can become stateless if:

Somalia, Lebanon, Qatar and Kuwait do not allow mothers (citizens) to marry a stateless man and to confer their nationality on their children, notwithstanding the fact that such prohibition forces children into a condition of statelessness [2]. Likewise, mothers in Somalia, Qatar and Kuwait cannot confer nationality to children born out of marriage [2]. By consequence, stateless children are unable to access primary education, healthcare, and have rights and duties entailed in citizenship once they become adults. In South Africa, the Bill of Rights states that all children have the right to a name and a nationality from birth [8]. Registration of birth is achieved though issuing a birth certificate, which thus becomes central to the identification of the child. Without the birth certificate, the child becomes invisible [8]. However, there are countless cases of social workers failing to register the birth of children born from immigrant parents or in rural areas [8]. Hence, what can happen is that unregistered women, who are not recognised as South African citizens, cannot register their own children at birth, causing a cycle of statelessness and vulnerability [8]. The implications of such lack of access to identification can manifest into generational statelessness, which follows children into adulthood and is passed to their children once they have their own family [9]. In practice, stateless individuals in South Africa cannot open a bank account, enrol to study, apply for social grants, sign a lease agreement or get married [10]. They have little to no access to healthcare and are vulnerable to incarceration [9, 10]. This is especially concerning if we consider UNHCR’s statistics, which stress how approximately 100,000 children in South Africa are not registered at birth, with lack of birth registration being one of the most prominent causes of statelessness in Africa [9].

A study confirmed reports of women forced to have sex either to get an immigration document or to pay off a debt for a document [11].  In one case a South African Civil Society Organisation employee in 2010 assisted women with obtaining asylum-seeker permits in return for sexual favours, a practice alleged to have continued for years[11]. Various groups of immigrant women who were concerned about getting asylum documentation for enrolling their children in school, and/or accessing healthcare, borrowed money from a gang to get a Section 22 asylum seeker permit or Section 24 refugee status permit and as a result the gang forced the women to prostitute themselves to lawyers or government Department of Home Affairs men and others. If not participating in prostitution, the women would be forced to sell drugs [11].

In addition to what was previously discussed, nationality laws can discriminate against women by contributing to their statelessness during the acquisition/loss of nationality by marriage [2]. In fact, women tend to assume their foreign spouse’s nationality due to tradition or obligation under the principle of dependent nationality [2]. Yet if they are required to renounce to their nationality prior to acquiring that of their spouse, women can be exposed to potential statelessness in case of divorce or separation [2].

[1] ID4D – Identification for Development (2018) “Global ID Coverage, Barriers, and Use by the Numbers: insights from the ID4D Findex Survey”, http://documents1.worldbank.org/curated/en/953621531854471275/pdf/Global-ID-Coverage-Barriers-and-Use-by-the-Numbers-Insights-from-the-ID4D-Findex-Survey.pdf

[4] CEDAW - Committee on the Elimination of Discrimination against Women, General Recommendation No. 32 on the gender-related dimensions of refugee status, asylum, nationality, and statelessness of women, CEDAW/C/GC/32, 14 November 2014, paragraph 53. https://www.refworld.org/docid/54620fb54.html

[7] CEDAW - Committee on the Elimination of Discrimination against Women, General Recommendation No. 32 on the gender-related dimensions of refugee status, asylum, nationality, and statelessness of women, CEDAW/C/GC/32, 14 November 2014, paragraph 61. https://www.refworld.org/docid/54620fb54.html

[9] DAILY MAVERICK, 30th November 2020, “Foreigners in the land where they were born” https://www.dailymaverick.co.za/article/2020-11-30-foreigners-in-the-land-where-they-were-born/