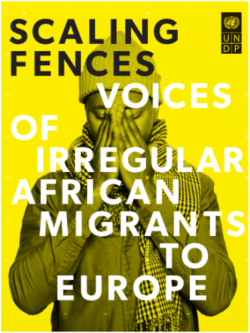 In October 2019, the United Nations Development Programme published a report on the perspectives and experiences of irregular African migrants in Europe, called Scaling Fences. The study entailed 1970 respondents who originated form 39 African countries. The aim of the study was to contribute to a better understanding of the relationship between migration and development.

The core message that the report is trying to bring across is that migration is a reverberation of an uneven development trajectory, which is especially failing young people. Furthermore, it highlights that contemporary irregular African migrants are poorly served by the regulatory framework and policy agendas in place, which do not aid development outcomes in Africa nor do they serve socio-political and economic contexts in Europe.

The report is divided into four chapters and a section on policy and programming implications. The chapters are 1) at home, 2) drivers and motivations, 3) life on the other side and 4) attitudes to return. The key findings of the report include the following. Those that decided to travel were relatively better off than those who did not; migrants had often benefited from the development progress happening in Africa. Furthermore, economic motivations – closely tied to self-actualization – were fundamental to wanting to migrate, though respondents pointed to multiple reasons informing their decision to leave. A next finding was that irregular migration is considered an investment in a better future, and that migrants take a calculated risk, comparing gains and losses. However, research points out that in Europe, these migrants are often underutilized in human and labor potential. If they do succeed though, the migration yields returns that are equivalent to a generational leap into the future, despite the risks and barriers. Next to that, migrants who had ‘made it’ in Europe showed a higher confidence and readiness to state a willingness to return home. Lastly, the report shows that gender differences were pronounced in relation to work opportunities in Europe, with women faring better, but experiencing more crime and sexual assault.

The report narrows it down to three main recommendations for policy makers. The first one is expanding opportunities and choice in Africa, by engaging young people in shaping the future, building inclusive economies and tackling external constraints to structural transformation. The second recommendation is going from ‘ungoverned’ migration to ‘governed’ migration by expanding legal pathways for migration, facilitating circular migration between European and African countries and establishing pathways to regularization for irregular African migrants already in Europe. The last recommendation is building a new discourse on migration in Europe by engaging the public, giving them democratic ownership over policy outcomes, and offering them accurate information on the situation.

If you want to read the report, the link to download is: https://www.undp.org/content/undp/en/home/librarypage/democratic-governance/ScalingFences.html