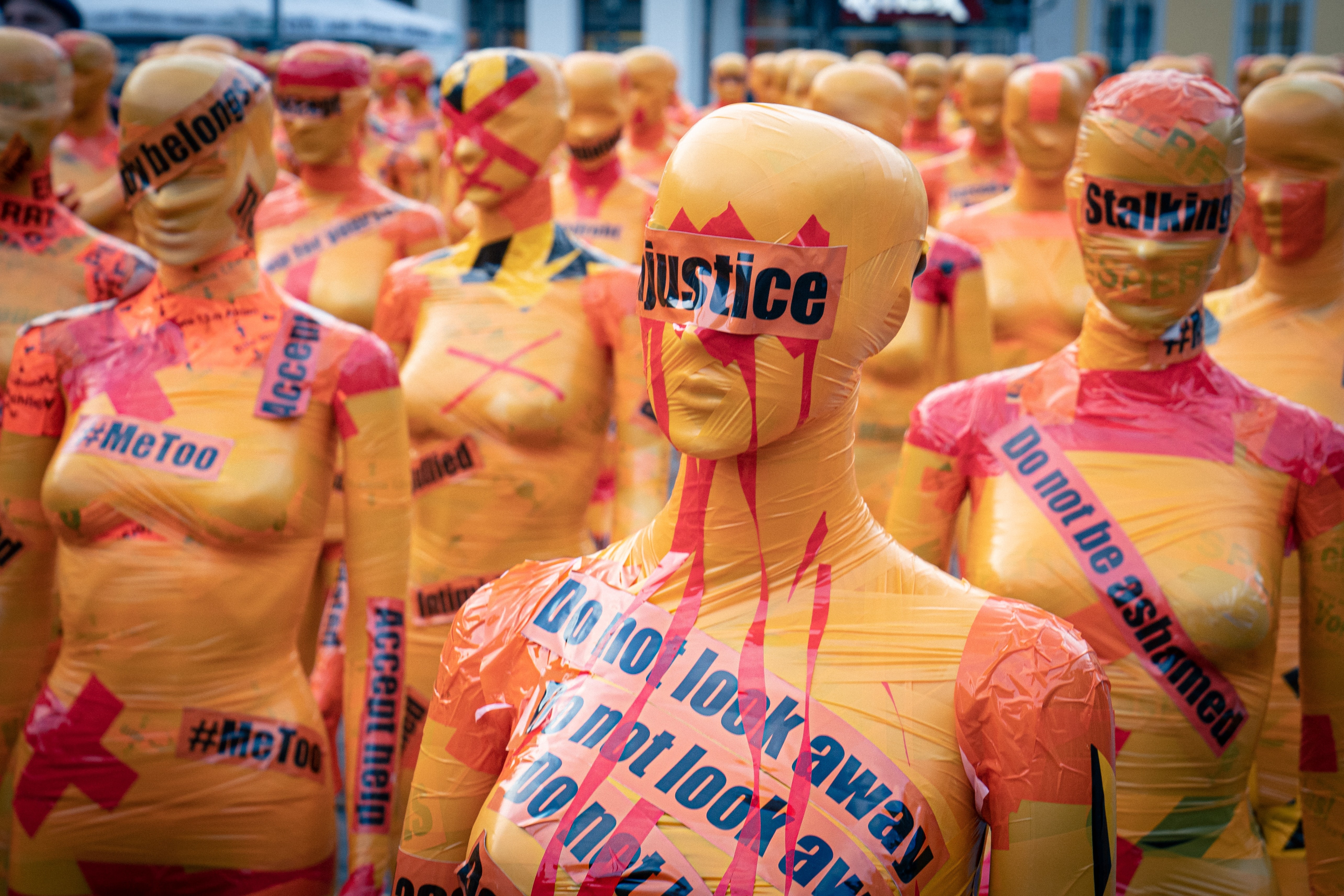 Gender-based violence is a growing social concern within most societies, and women are mostly the victims. With the growing feminization of migration, women migrants are at a higher risk of experiencing GBV. Migration and gender are two aspects that interact and impact one another. Depending on their unique features and circumstances, migrants may experience both positive and negative outcomes from migration. Similarly, a person's gender affects how they experience migration, including the dangers and vulnerabilities associated with their journey.

Gender-based violence can be conceptualized as any harmful act committed against someone's will that is motivated by socially constructed (i.e., gender) disparities between males and females. It could be psychological, financial, verbal, emotional, sexual, or physical. Victims of all genders can be affected, and it can happen in public or private. Underlying gender disparities disproportionately impact women, girls, and individuals who identify as LGBTI. Approximately one in three women may experience physical or sexual abuse worldwide. Migration away from one's country of origin can be influenced by GBV. Support Kind (2018) found that family members, gangs, and drug traffickers are responsible for GBV.

The risks and vulnerabilities that an individual faces while migrating are influenced by various events. The migration route's regularity and safety, in addition to gender, are important factors. The risks of GBV, including human trafficking, are increased by illegitimate or unsafe migration routes. Human traffickers disproportionately target LGBTQI people, migrant women, and young girls. The 2019 Trafficking In Persons Report posits that traffickers in the Caribbean primarily target migratory women from Jamaica, Guyana, and the Dominican Republic. LGBTQI people in Costa Rica, particularly transgender people, are at risk of sex trafficking.

Gender-based violence (GBV) against women, girls, men, boys, and people of all gender identities has two leading fundamental causes: unequal power relationships and gender stereotypes. To exercise authority, impose coercion, and deceive their victims, offenders aim to take advantage of the socio-economic and cultural barriers that adversely impact the inability of women to gain access to justice. Making successful interventions requires an understanding of these reasons.

Gender inequality and GBV have been addressed through national labour laws, employment policies, and programs in one of the measures proposed by the Global Compact on Migration (GCM). This strategy aims to lessen women's vulnerability by enhancing their access to the labour market while recognizing their independence, agency, and leadership. The GCM states that nations must ensure that the human rights of women, men, girls, and boys are upheld at all migration phases.

With migration, the possibility of positive outcomes and a contribution to women's empowerment exists. Opportunities for increased earnings, asset ownership, self-esteem, decision-making authority, and new levels of autonomy may become available. On the other hand, when gender and migration interact negatively, it can result in stigmatization, exploitation, and various forms of discrimination. Women and girls may be able to flee instances of gender-based violence in their own countries by migrating.

As the number of people fleeing violence rises, deteriorating policies at borders and detention facilities in nations may result in refugee women being taken hostage by armed groups and human traffickers. A UNHCR report details the equally terrifying threats in refugee and internally displaced person (IDP) camps. Traditional behavioural norms and restraints are often violated in refugee situations, especially when refugees are imprisoned in closed camps. In such cases, other refugees may rape refugee women and girls, either singly or in gangs, and self-appointed leaders may thwart efforts to punish the offenders. Unaccompanied women and girls in some camps have been known to enter so-called "protection marriages" to prevent sexual assault.

Alarmingly, this abuse can occur at the hands of the national migration agency or humanitarian professionals, in addition to being committed by male camp inmates. In Guinea, Liberia, and Sierra Leone, security personnel and employees of aid organizations were found to be sexually abusing girls, according to a 2002 investigation. Despite this, the issue has not yet been resolved. A French soldier was recently charged with child molestation in the Central African Republic. There have also lately been reports that hundreds of girls were raped and sold in an IDP camp in Nigeria. In response, the nation's National Emergency Management Agency (NEMA) established a committee with members from various state agencies and the Nigerian Red Cross Society to investigate the alleged violations.

Policies intended to limit immigration or tighten border controls may worsen SGBV by encouraging women to choose dangerous paths to reach their destination country. Women may become susceptible to trafficking and sexual exploitation due to conflict and migration-related dangers. Conditions of reception and integration policies in host nations may further enhance the risk of SGBV for immigrant and refugee women. The plans and agency of these women should also be investigated since they are not merely "victims." In conclusion, even though we are aware that women who are refugees and migrants are more vulnerable to violence, we don't have a systematic knowledge of the forces at play that reproduce violent behaviours. The goal of the study is to close this gap.

Strengthening the safe and ethical collection, analysis, and dissemination of data on migrant women's and girls' experiences of violence is essential to combating it, preventing it, and improving the delivery of vital services to survivors. Additionally, it is crucial to ensure that health, justice, and social service providers are trained on the needs of migrant women and girls. This training should include how to identify and assist them in a survivor-centered and gender-responsive manner.

Women have the right to "the highest quality attainable" of physical health and the right not to experience "cruel, inhuman or humiliating treatment," according to the 1993 Declaration on the Elimination of Violence Against Women, among other rights guaranteed. The Declaration further declares that governments must safeguard women, especially refugees, and grant them access to the rights stated.

Undoubtedly, many states, as well as the UNHCR itself, are not upholding these responsibilities. The 2011 UNHCR strategy against sexual and gender-based violence (SGBV) emphasized three areas that must be improved to protect both potential and current victims which include (1) Attacks committed by peacekeeping personnel and aid workers are an abuse of power. International actors have acknowledged the need to combat sexual assaults committed by the military and other personnel. In 2000, the United Nations Security Council enacted the Women, Peace, and Security Resolution. According to the Resolution, peacekeeping operations must have a gender perspective, in which the effects of every proposed action on both men and women are considered. (2) The Resolution further urges that the current code of conduct be altered to provide proper control and accountability systems to help prevent sex crimes. (3) Finally, it emphasizes the necessity of gender diversity among the peacekeeping forces, military observers, and civilian police.

Ultimately, it is our collective responsibility to protect the rights of women and female children from any physical and sexual assault as they enter our borders. In South Africa, we have a saying, "Wathint’Abafazi, Wathint’Imbokotho," meaning You Strike a Woman, You Strike a Rock. Women should be treated as national treasures regardless of where they are from or the circumstances, they find themselves in. Gender-Based violence, as mentioned above, is rooted in the imbalance of power between the sexes. How do we fix that as a society? During this month of women, we should all remind ourselves that we all come from a woman.  It is time to fight for our women, time to hear our women and time to heal our women. Undocumented migrants should be treated as humans as well. When those in power abuse their power, investigations must be carried out. Those found guilty must face the full wrath of the law.

Photo by Mika Baumeister on Unsplash