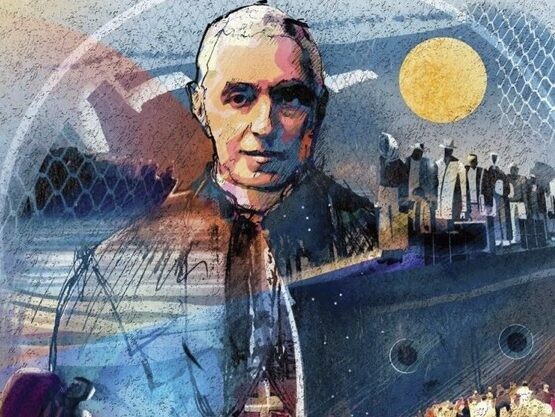 On Sunday 28th of November 2021, the Scalabrinian Congregation celebrated its 134th Anniversary since its foundation in 1887 from the bishop of Piacenza, Italy, Giovanni Battista Scalabrini.

Blessed Scalabrini main purpose was to care for the welfare, to protect and assist people on the move, crossing the Atlantic to reach the Americas. This pilar continues to route the work of the Congregation and its various lay organisations, actually present in five continents and in thirty-one countries, always focusing in laying a hand to migrants, refugees, internally displaced people, and seafarers worldwide.

«The mission the Church entrusts to us through our Founder, John Baptist Scalabrini, Bishop of Piacenza (1839-1905), is this: to become migrants with the migrants, so as to build with them, even by the witness of our life and our community, the Church, which in its earthly pilgrimage associates itself particularly with the poorest and most abandoned classes of people» [1].

We would like to highlight some parts of the message for the anniversary, entitled: “Making the world everyone’s homeland”, written by the General Directorate. «Belonging to a homeland is the result of chance, but it is a largely undisputed belonging. The homeland is not chosen, it is found … In this, the homeland is like the mother, in spite of its appearance it is always the most beautiful. One can see its faults, one can also criticize the motherland, but only by those who belong to it … Scalabrini’s passion for migrants led him to solidify, but also to revise the concept of homeland. On the one hand, he believes that taking care of migrants is a duty based on both Christian and patriotic reasons, and therefore a duty for everyone. Furthermore, he believes that the purpose of the institute he founded is to maintain the unity between religion and homeland … Consequently, Blessed Giovanni Battista considers important that the culture of origin be preserved among the migrants, because this is functional to the maintenance of the faith … He is aware that emigration reconfigures the concept of homeland in favour of one based not so much on vain sentiments as on hard necessity: «for the disinherited, the homeland is the land that gives him bread». That’s why many people emigrate to find «elswhere what their homeland cannot give them or even takes away from them». In this cases, «the homeland becomes the one chosen, not the one left behind». «From a sociological point of view, migration is therefore a disruptive force that “elevates human destinies, expanding the concept of homeland beyond material and political boundaries, making the world everyone’s homeland”. From the perspective of faith, God is guiding humanity “even through catastrophes, toward the ultimate goal, which is man's perfection on earth and God's glory in heaven”» [2].

This message is a good way to start to untie ourselves from negative constructs about people on the move. Also, the Holiness Pope Francis during his message for the 107th World Day of Migrants and Refugees 2021 spoke about an “ever wider we”. He mentioned that Christ, in Salvation History, died and rose so «that they may all be one» [3]. This “we” mentioned from the Holiness and willed by God, since the time of its creation plan when he created «us male and female, different yet complementary, in order to form a “we”», was thought to be a symbol of union for all humans in their diversity. This “we”, at the current time, has gone lost; it has cracked due to aggressive forms of nationalism [4], radical individualism [5] and the cruel functioning of the neo-liberal economic system. Under this rules, the society has been divided into two categories of people: “we” and “others”, on the base of the social group which people take part in. The people categorised as “others”, such as: migrants, refugees, poor people, people living under social exclusion and/or stigmatisation, are the mostly affected [6].

The vulnerable circunstaces which migrants face before, during and after the their journey are multiples, and should make us reflect about the fact that every single person – with or without a migration background – should have the right to choose the place where to live in. Actually, not everyone has the chance to make this choice freely, on the contray, some people are forced to live the country of origin or of residence.

The 134th Scalabrinian Congregation Anniversary is a good occasion to remember that “we” are all part of the same big family coming from and going forwad the same homeland. It should remind us the vocational mission of the Congregation «to help people discover Christ in their migrant brothers and sisters and perceive in migration a sign of mankind’s eternal calling» [7]. Migration is a phenomenon that exists since the origin of the human family. Mobility should be an occasion for people of different nationalities to meet and know each other, an occasion to share the own experiences and to build human relations characterised by equality, reciprocity, and solidarity.

The Scalabrinian Family and its partners have now new challenges to face to ensure dignity and rights for people on the move, but, on the other side, together it is possible to create a new future where nobody is left behind. The General Administration invited to «strengthen the will to walk together, not emphasizing the homelands from which we come, but the greater homeland», the one that «always remains elsewhere» [8].

Photo by Redazione Ucos in News