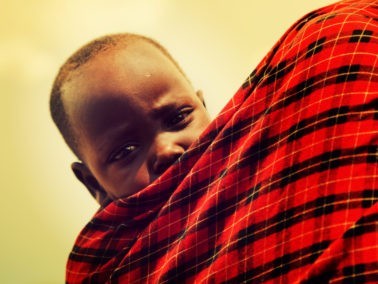 Previous studies at the various borders in southern Africa e.g. South Africa/Mozambique, Zimbabwe/Mozambique indicate that irregular movement of young people across borders is common and motivated mostly by the search for employment and livelihood opportunities.[1] Given the lack of access to documentation and highly securitised official points of entry we know from this previous research that young people and their relatives in both countries employ quite widely shared and sophisticated strategies for unofficial border crossing. Some of these strategies are designed to protect children but others make them more vulnerable to exploitation and even violence including trafficking.[2]

Research also suggests that informal and formal institutions and social networks in border towns such as Musina (on the South African side of the Zimbabwe/South Africa border) play a vital role in both protection but also the exploitation of children.[3] There is evidence too that many young people crossing borders informally use border towns as a stop-off point to make some money for further travel across the border or to major destination cities like Johannesburg or Lusaka, as a place to access illegal crossing support and sometimes even as a place to stay to live and work in the informal economy associated with such border towns and the neighbouring rams and informal industry.[4]

Border towns and zones are therefore a rich source of information about issues related to informal movement across borders including smuggling and trafficking. They also can provide insights to forms of protection, vulnerability and the resilience strategies of young people. This information should play a key role in the discourse around the irregular movement of children across borders, which to date has focused primarily on the issue of trafficking with little understanding of the complexity behind irregular movement. In particular, the fact that irregular migration is often chosen and part of historically-created informal strategies for ‘crossing the border’ means that despite interventions to secure borders and prevent movement children will keep on moving – and will keep on needing support to avoid risks including trafficking.[5] Therefore where a broader discourse is needed on this context there is also need for more in-depth understanding of how to support and protect young people who either pass through or remain for some time in border towns as they move – building on the experiences of those working on the ground.

As described above the research that has been done on children on the move in border towns and zones has focussed mostly on the South Africa/Zimbabwe and South Africa Mozambique borders. Zambia has large numbers of children crossing borders from neighbouring DRC, Malawi and Mozambique, it is also used as a transit country for those travelling from further north such as Ethiopia to get to South Africa[6] yet there is little research done in Zambia on migrant children, particularly on unaccompanied children.[7]

Aim of this study

This study seeks to redress this gap through an ethnographic study in the eastern border area of Zambia between the towns of Chipata and Nyimba. See arrows on map below. 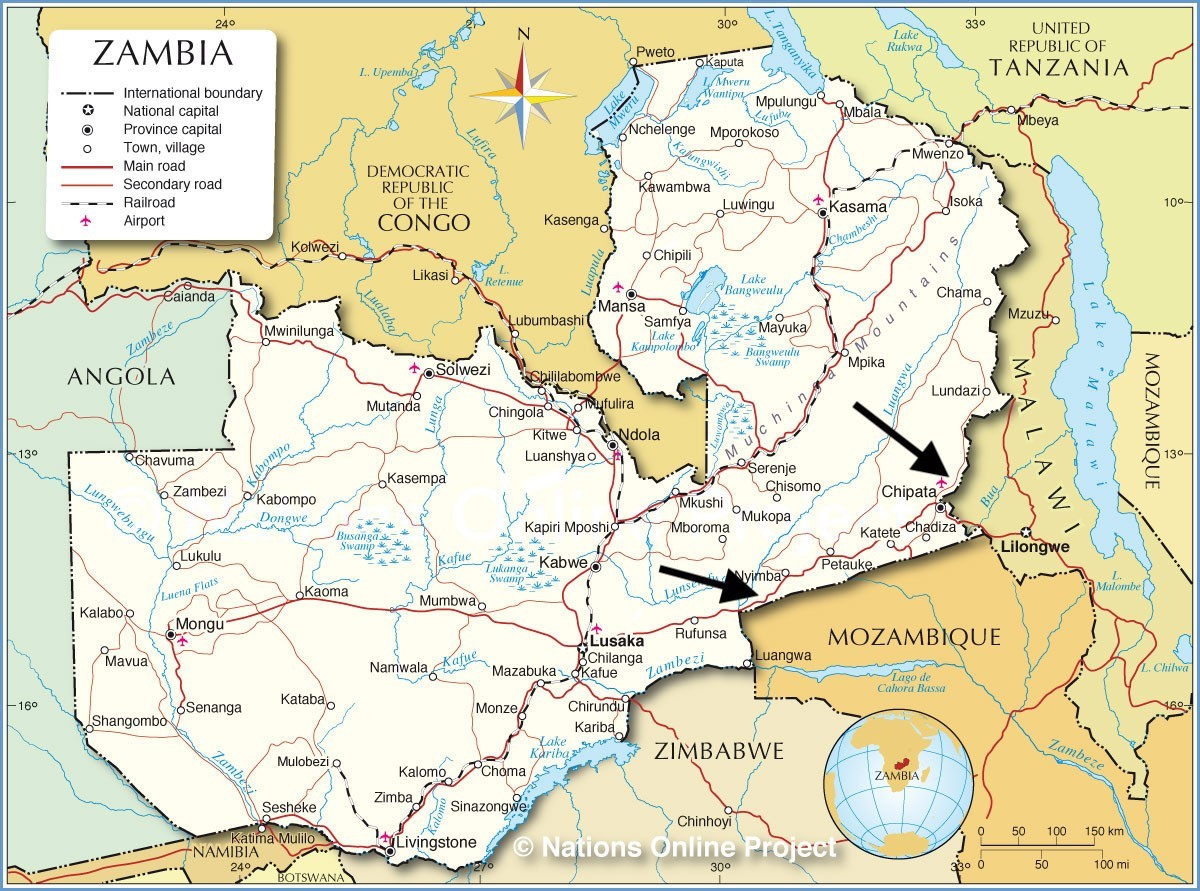 The towns of Chipata and Katete are used as transit points for children moving through Zambia to South Africa. Most of these are young men coming from Ethiopia. There are also large numbers of young people crossing the borders from Malawi and Mozambique to work in informal trading in the towns and also on the farms in the area. Young people also use the area as a stopping off point to make money to move on to find work in Lusaka. There is a long history of cross border migration for work in this area on the local tobacco farms. The Department of Social Development in Malawi is interested in the vulnerability of children working on tobacco farms and has a project with the large tobacco producer JTI to reduce child labour.

Agencies such as Save the Children who has a ‘Children on the Move’ programme in Zambia have done some work in this area. They have identified one of the main issues as the lack of services for young migrants. The biggest issue is that undocumented under age migrants, especially those in transit from Ethiopia, often end up in correctional facilities in the towns of Katete and Chipata because there are no safe shelters in the area. They have also found that young migrants from Malawi and Mozambique who work and live in the villages around the towns cannot access education and health services. Given the dearth of research in this area, and areas such as this in other parts of Africa[8] our hope is that a close study of the area will contribute to the emerging global understanding that protection and support of ‘youth on the move’ must include services in border towns and locate trafficking in relation to other forms of movement. The protection issues faced by children in the eastern area of Zambia are not dissimilar from those faced by children in border towns in Latin America, the Middle East and other parts of Africa, with recognition that the contexts are different.

In particular the research study will focus on:

The study will use a ‘light’ or ‘rapid’ ethnographic approach[9] where we use:

We suggest conducting two participatory research groups per setting with children on the move in the following settings:

We will attempt to find and listen to young people from DRC, Mozambique, Zimbabwe and Ethiopia in the above groups.

We will conduct participant observation based on a set of questions based on the research focus.

We estimate conducting 8 interviews with NGO service providers and 8 with officials (4 each in Chipata and Katete areas).

We would also try to interview at least two farmers who employ young migrants and those who ‘guide’ young people across the border if possible.

Field work will be conducted by Rebecca Walker and Glynis Clacherty with an interpreter.

[3] (Save the Children, 2020a) and  Verdasco Ressano Garcia research

[4] (Verdasco, 2013) Save the Children study on cross-border coordination (forthcoming)

[6] Personal communication Save the Children, Zambia Children on the Move Co-ordinator.

Glynis Clacherty (PhD in Migration Studies, University of the Witwatersrand) has worked in child-based research for the last 20 years. She is recognised internationally as an expert in ethical participatory research with vulnerable children. Much of her work has been with children on the move. In 2005 she conducted research in almost all of the refugee camps in southern Africa (and repatriation camps in Angola) for the UNHCR gender desk looking at protection risks for children in the camps. The work was fed into the 2006 UN Report on Violence Against Children and into the development of gender-sensitive programmes in the camps. She also undertook a number of studies (starting in 2003) with Zimbabwean and Mozambican children crossing the border into Musina and Komatiepoort. Most of this work was conducted for Save the Children and fed directly into the development of programmes to support children on the move in these two border areas. She has also developed programme-related publications for girls and boys on the move for UNICEF, UNHCR and Save the Children. Together with Dr Walker, she conducted a study on Girls on the Move in Southern Africa (including work in Zambia) in 2019 which was part of the Save the Children Global study on Girls on the Move. She is a Research Associate at the African Centre for Migration and Society at Wits University.

Rebecca Walker (PhD in Social Anthropology, University of Edinburgh) is a Research consultant and associate and lecturer at the African Centre for Migration and Society (ACMS) where she works on issues relating to gender, migration and, health. She has become a recognised expert in the area of gender and migration with a particular focus on how the trafficking discourse has affected programming and the need to collect in-depth evidence about the actual lived experience of women and children who migrate. Together with Dr Clacherty, she conducted a study on Girls on the Move in Southern Africa which was part of the Save the Children Global study on Girls on the Move. She also recently led a Save the Children study to assess the impact and strengthen cross-border coordination mechanisms and case management in Southern and East Africa.

Filippo is a Missionary of St.Charles. Born in Italy, he completed his Bachelor Degree at the Theological Institute of Northern Italy (Milan) and obtained a Diploma in Pastoral Theology of Migration from SIMI (Scalabrini International Migration Institute - Pontifical Urban University in Rome). Since 2017 he is the Executive Director of SIHMA at the Cape Town Office and the Coordinator of social projects of the Scalabrinian Congregation in Africa.

ACERWC, 2018. Mapping Children on the Move within Africa. African Committee of Experts on the Rights and Welfare of the Child.

Bertrand, S.L., Castrataro, K., 2019. Cross-Border Protection of Children on the Move in East and Southern Africa: A quick reference guide for bilateral coordination. Save the Children Sweden and Save the Children International.

O’Higgins, A., 2012. Vulnerability and agency: Beyond an irreconcilable dichotomy for social service providers working with young refugees in the UK. New Directions for Child and Adolescent Development 2012, 79–91. https://doi.org/10.1002/cad.20012

Shuteriqi, M., 2015. Challenges faced in protecting children on the move. An NGO perspective.

Verdasco, A., 2013. Strengthening Child Protection Systems for Unaccompanied Migrant Children in Mozambique: A case study of the border town of Ressano Garcia, Innocenti (Working Paper No. 2013-13). UNICEF Office of Research.